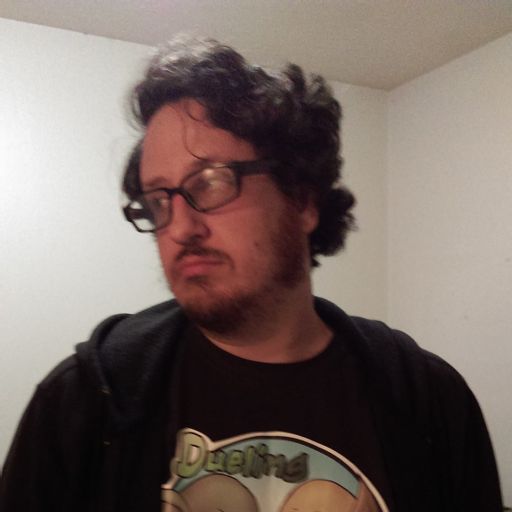 Brandon - or Maultavius, as he's known in the Secret Order of the Ancient Magicks - is a 73rd class wizard with a penchant for the schools of Conjuration and Transmutation. His best works are illustrated wherever you see something truly unsettling and out of place on the Material Plane. He likes long walks off of short piers (usually tricking some lust-ridden damsel to her watery demise while he surreptitiously activates his ring of water walking), and drinking copious amounts of coffee out of his most favoritest kitty mug (may it rest in peace). When he's not showboating his arcane prowess, he spends an inordinate amount of time cataloging and researching tirelessly for each and every episode of Dueling Ogres. Really. No, he really does. I promise.

The gentle sasquatch, known colloquially as "Remington," has been kicking around the rolling hills of West Virginia for hundreds of years. It is uncertain where he came from or where he will eventually end up, but for the time being you can usually find him hunkered behind any restaurant dumpster searching for half-eaten cheeseburgers while humming "What if God was One of Us?" While he's not reminiscing fondly over his ill-gotten acorn collection, you can also catch him pretending to know anything at all about audio while trying to produce this train wreck they call a podcast in his "studio," which is nothing more than an multidimensional pocket shimmed between the fabric of space-time. That's where sasquatches live, you know.

Episode 221: Life, Death, and the Batman

A.A. Milne's Winnie the Pooh enters public domain, so Rem takes a stab at a new voice for the titular character! Lets just say it's uhhh....it's …